Once a year I attack the tottering piles of paper in my "paperless" office. This time around, under faded faxes and yellowing 1980s correspondence, I found a tatty rectangular card with the printed legend "Novacon 3" and my name written in by hand. My first convention badge! 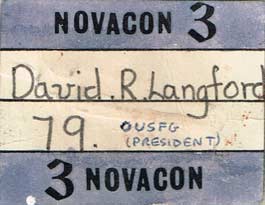 Those were the days when affordable badge technology consisted of cutting up cardboard and sellotaping a safety pin to the back of each fragment. The principle of universal entropy then ensured that the pin would sooner or later fall off. In that primitive era, they simply replaced lost badges; at the 2013 World Fantasy Convention there was also a nominal charge of £75. There's progress for you.

My austere white Novacon 3 badge is partly coloured with blue felt-pen, to mark me as a mere Neofan whom experienced con-goers could gently encourage, or avoid like an approaching zombie apocalypse. We neos were also advised to ring a little bell and, from time to time, chant "Unclean! Unclean!"

That reminds me that coloured felt-pens were strongly recommended in Bob Shaw's spoof Fansmanship Lectures, adapting the techniques of Stephen Potter's Gamesmanship and Oneupmanship to fandom. The trick, said Bob earnestly, was to give your badge distinctive colours not used by the convention, thus conveying that you belonged to some important group whose special status was recognized by the con committee. The Secret Masters of Fandom! Nowadays this will probably get you thrown out.

By the time I'd graduated (or sunk) to working on con committees, tatty cardboard had been displaced by the massive Badge Machine. This dread device was forever jamming or malfunctioning, but when in a good mood could take a paper blank with the convention logo and seal it – protected forever by transparent plastic – into a round steel badge with built-in pin. Then the operators would remember that they should have written the member's name on that paper blank first.

Now badges are generally rectangular again, with impressive full-colour designs and laser-printed names inside laminated plastic. (Novacon does well here since they have professional SF/space artist David A Hardy permanently on tap.) Once when I was a guest at Minicon in Minneapolis, there was a panicky "registration party" at which several thousand such badges – delivered in random order by commercial printers – had to be frantically sorted by the committee, volunteers, guests of honour and whoever else could be press-ganged, including the cat.

Breaking the inviolable seal of the Con Fessional, I must now reveal the secret of getting badges right. The important thing is to put the name in large easy-to-read print. Not the convention name, since even the drunkest SF barflies usually know what event they're at, but the name of the actual badge owner.

This is because con attendees like to know who they're talking to: "Oh, you're L Ron Hubbard! I've always wanted to back nervously away from you ..." Squinting at teensy lettering can be embarrassing, especially in cases when the badge-wearer may just possibly misinterpret your intense scrutiny of her chest. As that sensitive feminist Isaac Asimov wrote in Foundation and Earth (1986), clearly after just such an awkward incident: "Her breasts were a smaller version of the woman herself – massive, firm and overpoweringly impressive."

Which reminds me of the Toronto Worldcon whose badge-holder, with copious storage space for your programme schedule, small change and maybe a lunchbox, was so huge it had to hang round your neck like a bib. I was shortlisted for two Hugos and proudly attached the nomination pins – miniature versions of the Hugo rocket – to the corners of this, er, breastplate. A lady friend promptly told me it put her in mind of pierced nipples. Oh dear.