I couldn't make it to Nippon 2007, the first World SF Convention to be held in Japan, but I was there in spirit – or rather, in cyberspace. The on-line coverage was splendid.

Before the Hugo Award ceremony, a bilingual message on the big screen warned the audience: "If David Langford wins a Hugo tonight, Martin Hoare will call him and probably wake him up." Even in Japan, it seems, they know the tradition that my pal Martin, who represents me at most Worldcons, phones in the small hours to break the Hugo news to a cursing, ungrateful Langford ...

But who was this masked figure with glowing eyes who bounded onstage, clad in tight-fitting red and silver? No, not Martin Hoare but Ultraman – the Japanese TV superhero who's been fighting unconvincing monsters since the 1960s. With incredible agility he defeated an Earth-threatening menace in a rubber suit, and summoned further Ultramen in past versions of his costume to foil a multiple lizardoid attack. Wild applause! Our world was made safe for Hugos.

The ceremony proper was co-hosted by George Takei and began with various non-Hugo prizes. After Naomi Novik of Temeraire fame had bagged the Campbell award for best new writer, we learned the significance of Ultraman. This year's Hugo base design features the superhero himself, looming over the traditional Hugo rocket, with Mount Fuji silhouetted behind. A most covetable trophy, even if this Ultraman's eyes and chest don't actually light up.

Nippon 2007 opened the Hugo presentations with the new categories that replace Best Editor. Now there are separate awards for editing long things (books) and short things (magazine or anthology stories). The short winner was Gordon Van Gelder of The Magazine of Fantasy and SF – who'd had a near-record number of Hugo nominations without winning – and the tall winner was Patrick Nielsen Hayden of Tor Books. Since they've both published me, I'll drink to that.

The Professional Artist award went for the second time to Donato Giancola, and Fan Artist to Frank Wu (who's American; there were, alas, no Japanese nominees let alone winners). Fan Writer: I blushingly admit that Martin Hoare delivered my latest acceptance speech. Fanzine: Science-Fiction Five-Yearly, which appeared regularly from 1951 to 2006 but ended with the death of its founding editor Lee Hoffman this year.

As is traditional, the SF newsletter Locus won the Semiprozine award and its long-time editor Charles N Brown drew level with me again after a few precious minutes during which I had 28 Hugos and Charles a puny, wizened 27. Best Related Book, a catchall category for nonfiction and art, went to Julie Phillips's James Tiptree, Jr.: The Double Life of Alice B Sheldon. Later a female blogger explained that Hugos are irretrievably sexist, because the only one not awarded to a man was for a biography of a woman who used a male pseudonym. But Lee Hoffman of Science-Fiction Five-Yearly was a woman, and so is her 2006 co-editor Geri Sullivan.

For the drama awards, Ultraman reappeared – but his vocabulary is confined to loud grunts of monster-bashing exertion, and the nominees' names must be read! Somehow they solved this technical hitch, and there was more British triumphalism as Steven Moffat collected the Short Form Hugo for his Doctor Who episode "The Girl in the Fireplace". Long Form went to Pan's Labyrinth, accidentally omitted from the original Hugo voting form. Somehow, though Labyrinth got more nominations than any film except The Prestige, they'd misprinted it as Pirates of the Caribbean: Dead Man's Chest. Oops.

Short fiction winners were all from Isaac Asimov's SF Magazine: Tim Pratt's "Impossible Dreams" as short story, Ian McDonald's "The Djinn's Wife" as novelette (a touch of Irish triumphalism there), and Robert Reed's "A Billion Eves" as novella. Finally the big one, the Hugo of Hugos for best novel, went to Vernor Vinge for Rainbows End.

Afterwards, voting figures were revealed by Ultraman's stupendous power of ultra-statistics. Naomi Novik gave Vernor Vinge his closest challenge for novel, but a quirk of the transferable vote system then dumped her in third place with Charles Stross at #2 for Glasshouse. Patrick Nielsen Hayden came just two votes ahead of the late James Baen. US author John Scalzi would have tied for fan writer if he'd had a single extra vote. Clearly the Langford ultra-powers are fading. Next year I'm doomed, unless Ultraman intervenes ...

David Langford thanks Chris O'Shea for Hugo photos and the voters for insane generosity. 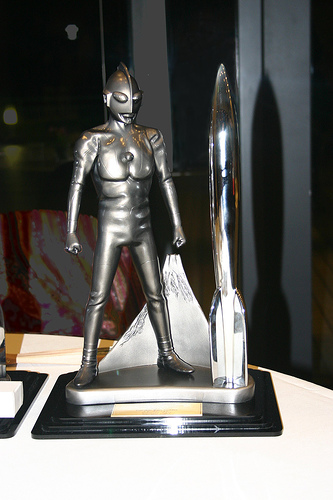