15 December 2016 You read it here last! I finally got around to looking through Brave New Words: The Oxford Dictionary of Science Fiction (Oxford University Press 2007) edited by Jeff Prucher. Yes, I know it's a nonfiction Hugo winner and I should keep track of these things, but the acquisitive impulse and opportunity to buy didn't coincide until a copy turned up in Oxfam the other day. A happy surprise is that there are cites from myself and Ansible under various headwords: CoA, -con, Frankenstein complex (did I really write that sentence? Ah, it was in a parody), multiverse, science-fictional, skiffy, space-operatic, and maybe others that I missed. Also lots of friends' names – and mine too – in the list of OED SF Citations Project credits. • The website for this project still exists but I suspect it's no longer being updated. "Condom" as shorthand for convention fandom, the one fannish term whose first citation there is from Ansible (though I'm sure that even in this sense it must be older), was not alas thought worthy of inclusion in Brave New Words. • On the principle that egoboo (look it up) never comes too late, I emailed Peter Weston in case he didn't already know that his fannish memoir With Stars in My Eyes features in the very select bibliography of books about fandom. He was pleased. Teresa Nielsen Hayden probably has mixed feelings about the appearance of her Making Book in the same list, since the author credit is to her least favourite typo "Theresa Nielsen Hayden" and the name should be alphabetized under N, not H. • The Plain People of Fandom: Bet you searched that list in vain for your own The Silence of the Langford, eh? Myself: I wasn't going to mention that, but since you raise the point, I was more than consoled by the three Langford books listed under "General Non-Fiction, Criticism, Essays". The same number as John Clute....

1 December 2016 Like a bowl of cold gruel or a miserable lump of coal in your Christmas stocking, the December Ansible marks the beginning of the official "Bah! Humbug!" season. This issue reports the launch of the Ansible Editions ebook of Yvonne Rousseau's delightfully ingenious The Murders at Hanging Rock – click on the cover image for more: 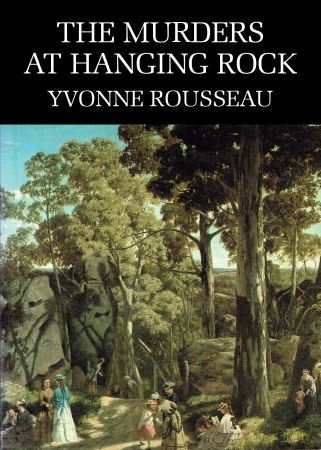 26 October 2016 Readers of Ansible will remember that the Hungarian magazine Galaktika has a history of naughtily publishing translated stories without permission or payment. I never got around to complaining – the queue seemed far too long – but a few days ago they contacted me with an apology and an offer of modest fees for two Langford stories published in 2007 and 2011. Payment duly arrived, and it turns out that my name appeared on both relevant covers. Here's one. 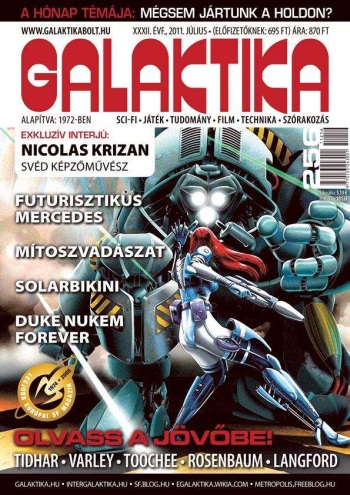 11 October 2016 The childish pleasure of discovering that the GIMP program I use for fiddling with ebook cover designs can do animated GIFs. Hence the following perversion of a 2002 Ansible cartoon by the late great D. West....

11 October 2016 It's rare for me to contribute guest posts to blogs – I never have enough time to keep all my own sites updated – but the Milford SF Writers' Conference made me an offer I didn't dare refuse. Hence a few reminiscences here.

3 October 2016 After the traditional delay occasioned by the fact that there is still a print edition (yes, Virginia) and the printers close at weekends, here in all its lack of splendour is Ansible 351.

26 September 2016 Two ebooks in a single month? This is madness. After the emotional upheaval of pushing through the sale of my mother's house to the point of actual exchange of contracts, I felt the need to distract myself with some soothing and even boring activity – which made me think at once of my 2009 collection of mouldy old computer magazine columns, The Limbo Files. Oh dear, I think I've just failed again in the subtle art of the Hard Sell. 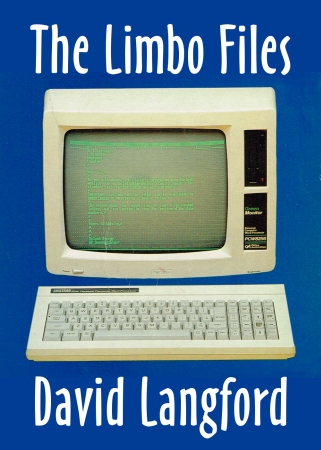 11 September 2016 Blowing my own trumpet again ... as a change from what seems like years of work on Then (as below), I have at last prepared an Ansible Editions ebook of my sf novel The Space Eater. • Meanwhile, as compensation for the withdrawal of the free ebook of the old, unexpanded Then – which seemed likely to cause general confusion – Rob Hansen's fanfiction The Reaffirmation now replaces Then on the TAFF site's free ebooks page. Note that this is a sequel of sorts to the legendary The Enchanted Duplicator (ebook available from the same page) and expects some knowledge of the original. 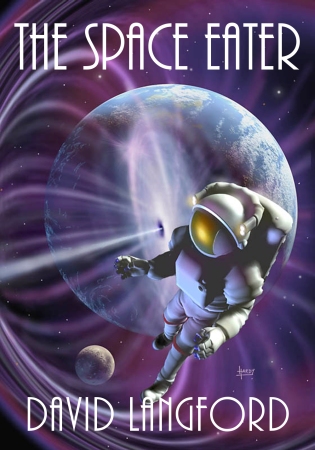 8 September 2016 The promised ebook of Rob Hansen's Then (see 10 and 16 August below) is now available through the official Then page.

1 September 2016 Here's Ansible 350. No special ceremonies attend the appearance of this suspiciously round number.

16 August 2016 At last I''ve received and can gloat over the first hardback proof of Rob Hansen's Then (see 10 August post below). Both hardback and trade paperback will be announced in the September Ansible, but early adopters can buy now through the official Then page and the Ansible Editions shop at Lulu.com.

10 August 2016 The first book edition of Then, Rob Hansen's history of science fiction fandom in the UK – much expanded and incorporating extensive new research since its long-ago fanzine incarnation – is on the brink of publication by Ansible Editions (where the book's official page is now up). Indeed it would be on sale even as I write, if I hadn't been persuaded to create a hardback version as well as the planned trade paperback. Soon, soon ... 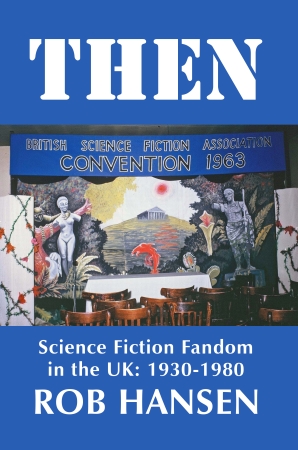 1 August 2016 Well, this should have been posted on 1 August but comes later because things were complicated and I forgot. Ansible 349 reveals to a palpitating world that Ansible® is now a registered trade mark in the UK! Plus some perhaps less boring news on science fiction and the like.

21 July 2016 An unexpected freebie: Jonathan Coleclough's calligraphed UK SF/Fantasy Literary Map, made up from the names of writers in more or less appropriate locations. I'm hugely flattered to find myself plastered all over Reading.

22 June 2016 I'm finding the EU referendum both stressful and depressing. The Remain campaign has hardly scintillated, while Leave has been shameless in its use of demonstrable untruths and misleading figures which are never retracted no matter how often exposed. I'll be voting Remain because I believe it's the wiser option – and also because, if better and truer arguments on the other side should come along, there will always be another opportunity to make the irrevocable and possibly catastrophic decision to Leave. After a Leave victory, though, we won't be offered another chance to vote Remain.

17 June 2016 I hadn't really thought that anyone would notice my (involuntary) retirement as SFX magazine columnist; but #276 dated August 2016 just arrived, and right at the end of the letter pages ....

28 May 2016 Happy surprise in today's i newspaper: David Langford of Reading is listed as a winner of the recent Inquisitor crossword set by "Phi". I've won the traditional Inquisitor champagne prize (now prosecco, and henceforth chocolate) several times in the past, but had never before finished one of those extra-intimidating puzzles that start with an empty grid without numbers or bars. Or, in this case, any indication of answer lengths. It turned out to have a slightly science-fictional theme.

22 May 2016 Rob Hansen's THEN: A History of UK Science Fiction Fandom 1930-1980 – much revised, corrected and expanded from its original four-volume fanzine appearance – continues to progress towards an actual trade paperback. Today I added what I hope are the final 1970s photos of sensitive fannish faces to the POD working document. Just when it seemed to be finished, Terry Frost posted a New Worlds 9 (Spring 1951) ad for the 1951 "Festivention" that was too good not to squeeze in somewhere: see below. 2/6d admission! And lucky members got to see PROFESSIONAL CELEBRITIES! • The current THEN is 428 pages long, without the yet-to-be-compiled index. Proof copies now awaited. I feel I've been working on this thing all my life. But of course all the real heavy lifting has been done by Rob Hansen.

18 May 2016 By popular lack of request, the expanded ebook edition of my 2009 mostly-nonfiction collection Starcombing. 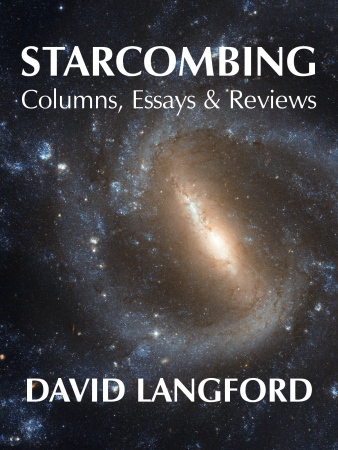 22 April 2016 Another momentous day of destiny: SFX #274 (dated July 2016) has arrived and contains the very last of the long series of Langford columns published in every issue since the first, dated June 1995. Am I downhearted? Yes, actually, but I've tried to cheer myself up with an expanded ebook of the first collection of these columns (1995-2005): The SEX Column and Other Misprints, first published 2005. More SFX columns, from 2005 to 2009, appear along with much other material in Starcombing, and all the rest should be collected (with a few extras to make 100 items in all) as The Last SFX Visions, now in preparation. A leading small-press publisher has expressed interest....

1 April 2016 Guaranteed free of tiresome April Foolery, here's Ansible 345. Yes, the paragraph about my SFX column being terminated is all too true. I thought I was safe for a few issues beyond #274 since I have formal commissions for three more columns, but the ultimate decision from on high was: "Tough shit, and we laugh at your pathetic suggestion of a kill fee."

19 March 2016 At last I've determinedly taken a little time off other projects (mainly the ever-demanding SF Encyclopedia and the first trade paperback edition of Rob Hansen's UK fan history THEN, much expanded from its original fanzine incarnation) to rejig another Langford backlist title into ebook form. This is the big retrospective critical collection from 2003, Up Through an Empty House of Stars, as below; contents list here. The Ansible Editions site originally announced this for April 2016, but I got all excited and brought it forward to March. Buy it now! Act without thinking! 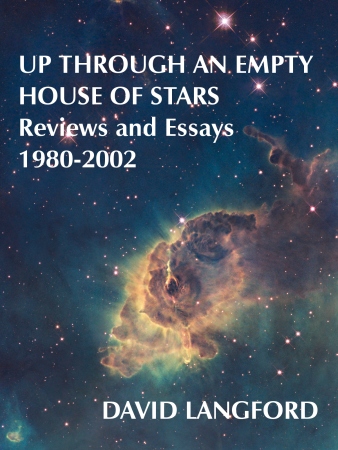 1 March 2016 Butting through the Channel in the mad March days, here comes Ansible 344. And God help all who sail in her.

27 February 2016 It hasn't been a good month, but I cheered myself up by improving that list of Josh Kirby Covers with many links to a new Josh Kirby Gallery (reusing some routines written for the SF Encyclopedia Picture Gallery in a simpler context). Good-quality scans of missing covers are welcome and will be credited.

1 February 2016 Here's this month's Ansible. It wasn't much fun to produce, I don't know exactly why. Maybe #350 later this year would be a good time to stop: that would take the count to 300 monthly issues without a break since the 1991 revival. Twenty-five bloody years!

23 January 2016 Another Great British Newspaper Headline to go down in history with the classic "Nudist Welfare Man’s Model Wife Fell For The Chinese Hypnotist From The Co-op Bacon Factory" – from which, I now learn, the intended first word "Legless" was sadly cut for space reasons. • Later: I've added a few more SFX columns to the vast online archive. Alas, the allowed word count shrinks with every redesign of the magazine, and it'll be a while before I can fill another book.

14 January 2016 Timeless sentiment from an old detective novel: "The crying need of this age is some means of protecting historic buildings from town councils." (R. Austin Freeman, The Mystery of Angelina Frood, 1924)

4 January 2016 Today, shyly peeping through the withered verbiage, comes the first Ansible of the year. Not without difficulties: after the usual slog into Reading town centre to get the paper edition printed, we found the one and only copy shop in a state of deep uncertainty about when the ailing photocopier would be cured of its New Year hangover. It seemed advisable to buy in some coloured paper and print Ansible at home: though braced for exorbitant costs on the order of £10 a ream at horrible old Ryman, I was taken aback by the actuality of six quid for 100 sheets (i.e. £30 per ream). Must invest in some emergency stock from an outlet with sane prices....